The O2. After the Royal Albert Hall performance, who knew what to expect. I knew what I was looking forward to: Nitzer Ebb. Sadly, due to meetings with DM management (which consisted of 25 minutes of hallway waiting, and two actual minutes of "meeting"), I missed almost the entire Nitzer Ebb set (boo!). I did, however, manage to get back in time to catch the last two songs. Pictures are included in this blog set.

Before the show (and just before Nitzer Ebb hit the stage), the band participated in a "Meet & Greet" with some fans. Let me take a minute here, and address what has to be my number one topic via email during the tour: Meet & Greets. Meet & Greet events are (usually) done by the record label, and through contests on radio stations. I don't have a way to get you into a Meet & Greet. Even my friends don't get to participate in them. While I appreciate that fans want to have a minute to shake the hand of the band, and get a picture, I can not help you on your quest. Ok, public service announcement over...back to the show. :)

As usual, another great set by the boys. Highlights include the return of the catwalk stage (which made for some fine pictures), the jam at the end of "Home" (Mr Gahan: "Sounds like Essex is in the house"), and the crowd singing "Happy Birthday" to Mr Gordeno. Actually, after the crowd sort of stumbled through part of "Happy Birthday", and Mr Gahan shouted "You can do better than that!", Peter then played "Happy Birthday" on the piano to help the crowd. Nice.

On to the after show. Again, while I can not hook people up with after show passes, I do usually attend the after shows. Most of the time, an after show consists of a free soft drink, and some chips. On one side of the room, you can spot Martin and/or Fletch, due to the absolute swarm of people around them. That lasts for a few minutes, and that is that. The RAH after show was much larger (and atypical), but it had nothing on the O2 after show. Now THIS is what fans have in mind when they think "after show". Another who's who of DM history in the house (Lynn from Bong, Dave Bascombe, Mr Wilder, Gary Numan, JD, most of Mute, Douglas of Nitzer Ebb...the list goes on and on). Personally, I have never seen so many people (had to be a minimum of 300), in so large of an after show area. I was in awe. So many people to chat up, live DJ, free drinks - this was not your usual after show! Very cool.

While Mr Wilder did not perform at the London O2 show, he was in attendance. Alan was kind enough to give a brief interview for the site. Definitely worth a viewing.

After the show (and after show), it was off to stand in a queue for one hour in -2C weather (plus wind chill = ouch!) for a taxi. A special thanks to the London Underground for closing their rail service on such a huge show night. :P The next day, I headed back to Los Angeles, and proceeded to pass out for a few days.

To everyone I met while in London, thanks for your kindness.

Peter, Big Pete and May will pick up the last four shows.

"See you next time!" 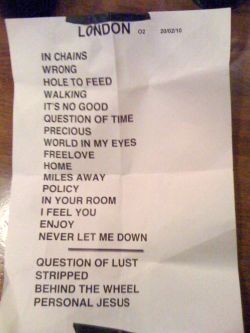