The final show of the tour and the last time In Chains, Hole To Feed, One Caress, Miles Away / The Truth Is and Photographic were played live. Nitzer Ebb was the support act.

So that's it. Tour is officially over. I'm sat in the airport with a surreal kind of feeling in my stomach. I am on my way home, and the Tour Of The Universe is over. It's been a ride, I tell ya.

The final show was obviously quite emotional, and it's all a bit of a blur now to be honest. Nitzer Ebb bringing guitar tech Jez Webb on stage for their track "Payroll" was a lot of fun. Depeche doing "Photographic" for only the second time this entire tour was a nice surprise. Dave's little speech was lovely - he thanked the entire crew, then pointed out Jonathan Kessler on one side of the stage, and Daniel Miller on the other (the follow spot that was supposed to find him instead found one of the band's security people - most amusing). At one point there were at least ten thousand people holding up signs saying "DM - Come Back". Very moving.

After the gig everyone was saying their goodbyes - first at the after show party, later on at the hotel bar. There was a mixture of relief and sadness doing the rounds.

The funny thing is of course, that due to the massive delays and cancellations, people are getting to say goodbye in all corners of Dusseldorf airport right now, as they await word about the planes home.

It's been a long and hard tour, but a thoroughly enjoyable one. Can't wait till the next time!

Thank all those checking in to read about the shows, and the occasional random minutiae from life on the road. It's been fun keeping you all updated as best we could.

SEE YOU NEXT TIME!!! 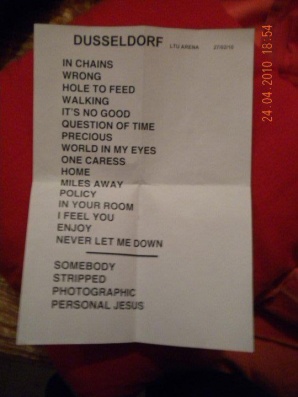