From DM Live - the Depeche Mode live encyclopedia for the masses
< 1986-08-16 Valbyparken, Copenhagen, Denmark
Jump to navigationJump to search

A good audience recording. Hiss is rather loud and overpowering, and there's some distortion overall. The right channel is generally louder than the left. Stripped may be taken from an alternate source, as it is somewhat better quality and much hissier than the rest of the recording, but it is definitely from the Copenhagen concert as Dave's shouts match the vinyl-sourced audience recording from the same concert. A couple seconds are missing shortly after the beginning of Shake The Disease perhaps due to a taping equipment glitch, but otherwise this is a complete recording as far as I know.

This being the final concert of the 1986 Black Celebration Tour, Martin performed Somebody in the place of "It Doesn't Matter Two". Dave also gave a brief speech prior to Boys Say Go! thanking the tour crew. 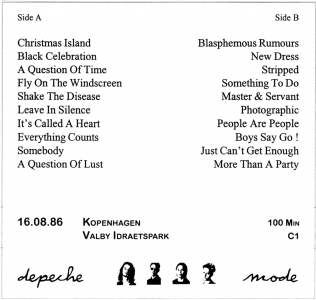 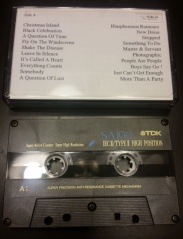