Alan Wilder said in the Q&A on Shunt:

The one and only Nashville concert we ever played, was well received but had the lowest turnout of any show on the whole tour. I suppose this was the reason why it wasn't high on our agenda to return. It's not the local DM fans' fault, it's just that Nashville seems to have such a one-dimensional music scene.

Martin Gore echoes this statement when he giving an interview by the phone that was captured in Depeche Mode's '101' documentary:

There's definitely certain areas where we suffer through a lack of radio support. We've just been to places like Nashville, for instance. In most places in the country, we're playing to sort of 10.000 to 15.000 people: in Nashville, we sort of get about 2000 people along - which we were quite pleased with in the end, because ticket sales weren't very good at all until the last day. And in that area it seems to nobody at all is playing our music: because of their background, that doesn't surprise us that much, but I think we know that there is an audience there. Wherever we get radio play, we do well.

Well, obviously we were quite concerned when we played Nashville, but it turned out to be great! It was a very strange audience. But that was a good concert. But I don't think it really changed our career.

When we did [shoot] - I think it was in Tennessee that we shot the first time - and David started waving his arms, and a few people did it, but we had no idea that that was gonna happen, [that] what happened there. And that what had happened [was], I can remember, it was so exciting for me at the time. [...] What's funny is that when we got down to Tennessee, the music place, for some reason - normally all things you plug in the wall all have 60 cycles [Hertz], and so you can count on that if you need a way of counting that. But there it wasn't. For some reason, there was a slight change, I don't know why or how or whether it still prevails or not, but it really threw us off because nothing matched with everything else we shot. We couldn't interchange it. The music sounded great, but it was like a 59-second signal was driving it.

Listen to an interview between Andrew Fletcher and DJ Marc Hill from Nashville's college radio WRVU here. This interview was briefly shown in the '101' movie.

Orchestral Manoeuvres in the Dark was the support act. 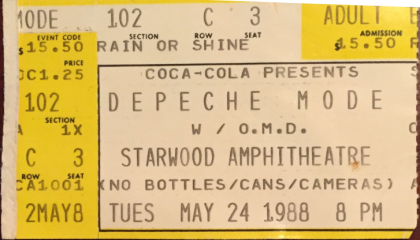