A good sounding complete audience recording. Bass is somewhat overpowering and slightly distorted, but otherwise this is a great recording. Dave gets angry at the crowd, yelling "HELLO?" about halfway through Behind The Wheel.

Many thanks to Brad for sending over his tape of this recording, and to Erich for sending me his MP3 copy of his own tape copy and getting me in contact with Brad. Brad gave this bootleg the title "Your Favorite Slaves" and "This Ain't No Disco!", as can be seen on the scans of the tape's homemade artwork, while Erich called it "The Bondage Angel"; scan of his artwork is also provided. I also tried to contact Atomic Records on Facebook to see if they might have the master tapes from any of their Depeche Mode recordings, but I haven't received any response so far. 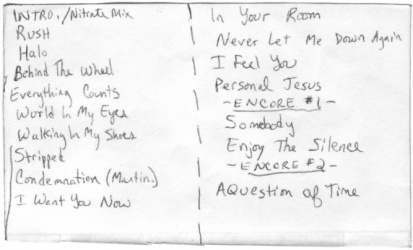