Our last 2 shows came and went quickly. Maybe it was a result of having been on the road for weeks at a time, getting close to the end, and dreaming of how it will feel to sleep in your own bed again. Another reason may be due to the fact the the gigs in Tampa and Ft. Lauderdale were 2 of the best; despite the tumultuous weather, the unforgiving thunder, and plane difficulties that resulted in arriving (very) late to the venue in Ft. Lauderdale, the US leg could not have ended on a higher note!

The Ford Amphitheatre in Tampa and the Bank Atlantic Center in Ft. Lauderdale were filled to the brim with enthusiastic crowds, anxious to catch one of the last couple of gigs on the Mode's US leg of the tour. And what better way to end a leg than in sunny Florida?

Check out some photos of our Floridian trip!

According to a 2008 tour list uploaded by PeterToo, a concert was initially planned in the nearby West Palm Beach (presumably at Cruzan Amphitheatre), taking place on 2009-08-22. 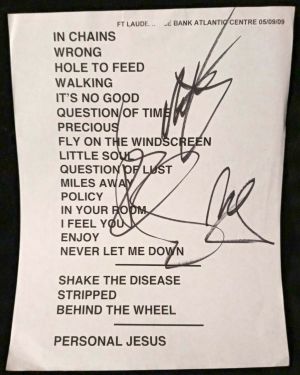