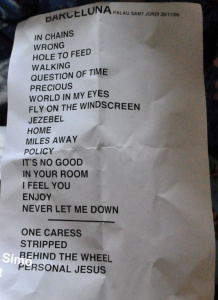 This night was recorded for a live DVD. According to Billboard, the total attendance of this concert and the previous concert was 34,193 people.

Arrived in Barcelona day before the show and dropped by the venue, things were happening, food was arriving, a few fans were milling about, and a few familiar faces from the DM crew walking around the venue.

The Venue is a huge place, and set in Beautiful surroundings, the fans waiting outside had some fantastic views of Barcelona from way up high at the Palau St Jordi, which is absolutely massive for an in-door venue. The DM tour machine kicked into life at around 8am, and by early afternoon the stage was all set up, and looking amazing, there's something very beautiful when you see the lights and projections in full effect, but without any crowd.

The soundcheck yielded a few suprises, A dave-less band ran through a few dm classics, and a fantastic version of "one caress" - which was just pure perfection, Martins Blue and white stripey mohair jumper and big wooly white hat kept him warm in the cold empty arena.

After the soundcheck PeterToo kept us all much amused by falling down stairs, twisting ankles and spraining wrists. He spent half the afternoon packing his ankle with ice, only to complain the ice was giving him frostbite, but at least the swelling had now gone down.

Anyway, several cameras were spotted around the venue, so the location of the Tour Of The Universe DVD became known to the fans today, to say that the show was being filmed it didn't appear too different from the other shows, apparently they are using different camera set ups for each day - so tomorrow night the cameras might be more noticeable. The main noticeable difference today was a lighting rig towards the back of the venue, to light up the fans - it made the waving hands on never let me down again look very impressive.

The show was great, the crowd took a few songs to really get going - but when they did it was amazing, it was pure DM magic - the show was well worthy of being used for the Tour DVD.

The after show was rammed with friends and family, a real celebratory atmosphere - the after show music was provided by the Legendary Daryl Bamonte - and his trusted iPod, it was all fine until Daryl's iPod randomly picked and old a-ha track, and it was quickly changed to some more suitable dance music, at which point my good lady taught Daryl the "hand in pocket" dance.

I took some great pictures of the show, some of which were from the rear of the stage, looking down - the view was quite stunning.

I am exhausted, but am more than a little excited at tomorrow's show, and am sure I am not the only one......