This was a special show for charity group 'Teenage Cancer Trust'. Notably, Alan Wilder joined Martin Gore on stage to perform Somebody, marking his first performance with Depeche Mode since his departure. Some additional musicians played strings for One Caress, Home and Come Back. This was the last time Come Back was played live.

The concert was announced on December 15th 2009:

"On Wednesday, February 17th, 2010, Depeche Mode will play a special charity concert for Teenage Cancer Trust at London's Royal Albert Hall. All proceeds of the Band's show will be donated to the Trust, which is UK charity helping teenagers fight cancer. This will be a unique event and the first time in their career that Depeche Mode will perform at the Royal Albert Hall. It's probably a once in a lifetime opportunity to see Depeche Mode play this historic venue and it's sure to be a memorable night. As a member of the Announcement List, you are receiving advance notice regarding the pre-sale for this event. Starting December 16th at 9am (London time), and continuing until December 17th at 5pm (London time), a special pre-sale link will be on the Tour Dates page of depechemode.com (link to the Tour page is above). After the pre-sale, fans will have an additional chance to purchase general on-sale tickets, starting Friday morning (December 18th) at 9am (London time). Don't miss your chance to see Depeche Mode at the Royal Albert Hall."

Alan wrote on Recoil.co.uk the next day:

Dave contacted me a few weeks back and asked if I'd be willing to join them on-stage. He assured me that everyone in the band was into the idea. I was very happy to accept, especially as it was all in a good cause and we were long overdue some kind of reunion of this sort. It was great to see everyone again and catch up a bit, and it was also the first time I have actually 'seen' Depeche Mode perform!

Martin Gore said that he was the one who asked Alan:

We weren’t in touch with [Vince Clarke or Alan Wilder]. Toward the end of the last tour I asked Alan if he would come onstage at London’s Royal Albert Hall and he agreed. It seemed natural to ask him.

I am sitting here, trying to come up with something to say regarding the Royal Albert Hall show. Yes, it was a great show. Yes, it was a hometown show (if you stretch the boundaries of Basildon to include Kensington). Yes, it was for a great cause (Teenage Cancer Trust). In the end, though, there is only one word that can totally and completely sum up the night: Alan.

I arrived at the Royal Albert Hall around 10am on show day, to start taking some venue pictures. I caught up with Hels, who was placing the signs on the doors (production, dressing room, catering, et cetera). Seeing a sign saying "Alan Wilder" go on a door, 16 years after his departure from the band, was a sign that this show would be legendary...and it was.

I came back a little later, and saw the soundcheck. As the tour is about a half dozen shows away from ending, I was a little surprised to see a soundcheck scheduled that had the band involved. By this time in a tour, it is usually just the crew making sure all the levels are right on the instruments and microphones. After a few minutes, in walks Martin, Fletch, Peter and Christian...and a string section. Ooooh - a good sign. The string section worked out arrangements to One Caress, Home and Come Back (a nice surprise). While the string section was soundchecking, Mr Wilder began walking around the venue. I knew this was shaping up to be a historic night.

After a while, Alan took to the stage, and did one run through of Somebody, and then the band left the stage. It was a little after 6pm. In a few hours time, I would be hearing one of the loudest crowd screams of my life.

The show started with opening act The Horrors. Before Depeche Mode took to the stage, Roger Daltrey (of The Who) came out and sang (not literally, sadly) the praises of Depeche Mode, showed a short film about the Teenage Cancer Trust, and then introduced Depeche Mode with these words: "Every decade throws up their icons, and some of them stand the test of time better than others. This lot stand as tall today as they ever do. Please welcome Depeche Mode!"

The crowd was ready for a legendary show, and the band did not disappoint. The screams from the fans when the string section were setting up were near-deafening. The crowd (and band) participation at the end of Home (complete with band jam session) was great. They were nothing compared to the moment Alan hit the stage, though. It was a combination of shock, joy, and tears throughout the crowd. People were virtually speechless, and it was amazing. If that wasn't amazing enough, the band brought out Photographic soon after!

At the aftershow, it was literally a "Who's Who" of Depeche Mode history. Most of Mute Records was in the house, as well as Ben Hillier, Flood, the legendary JD Fanger, Anton Corbijn, and almost every family member of the band.

A great night. A great cause. A great moment in Depeche Mode history. To all of you who were there, thanks for coming out and supporting Teenage Cancer Trust. For those of you who could not make it, enjoy these pictures from the show.

It was great [having] [Alan] hanging out with us for a couple of days and playing with us at the Albert Hall. It was really a lot of fun and sort of a magical night. It was great. We raised a lot of money as well for a teenage cancer trust that Roger Daltrey puts together every year. That was really great, and to have Alan up there onstage and watching him…

It seems that Dave Gahan also took the time to visit Basildon earlier that day, according to a post on Facebook from a fan who said that she saw him there at Starbucks. 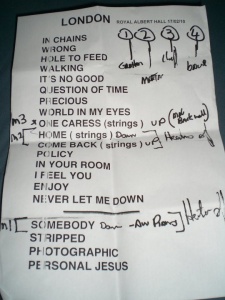