A good audience recording of the second concert of the 1986 Black Celebration Tour. This concert is notable for having the only circulating recording of Here Is The House performed during this tour; presumably, the first concert of the Black Celebration tour at 1986-03-29 Apollo, Oxford, England, UK also included the song in the setlist, but no recording from that date currently circulates. The song was dropped by the next concert on April 2nd at the RDS Stadium in Dublin; it was later performed during the 1990 World Violation Tour as an acoustic guitar version with vocals sung by Martin. A very short soundboard snippet of Here Is The House (as well as other tracks from the usual setlist) performed during the tour rehearsals can be heard here: 1986-03-00 Black Celebration Tour Rehearsals, Nomis Studios, London, England, UK.

There were some keyboard problems during It's Called A Heart and Everything Counts. Black Celebration is mostly missing (only Dave saying "Good evening Brighton" at the end of the song is present on the tape), Fly On The Windscreen and It Doesn't Matter Two are missing the first few seconds, and "Christmas Island", "A Question Of Time", "Photographic", "People Are People", "Boys Say Go!", and "More Than A Party" are missing entirely. 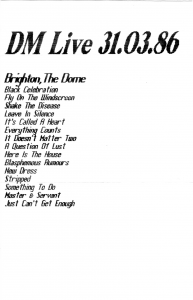 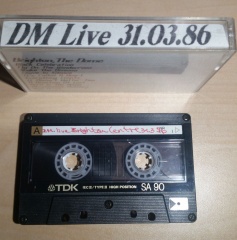