A very good audience recording of the second concert of the 1987-1988 Music For The Masses Tour. Like the previous night's concert in Madrid, the crowd is very excited and lively.

Pimpf is missing the a bit from the beginning (like just about every MFTM tour recording), and I did have to patch about 4 seconds of the very end of Shake The Disease using my previous transfer of what sounded like a low-generation tape to complete it seamlessly, but otherwise this is a complete recording. The last three tracks have a rather loud low-frequency hum. It seems that Elly's Sony WM-D6C was consistently about 2.5% fast since I had to slow down 1987-10-22 Madrid which was also Elly's recording. This probably explains why many of the better recordings of the tour are all playing fast - they're all Elly's!

Note that the extended 12" version of People Are People was performed during this concert, with a lengthier break in the middle of the song. This version would be played up through the seventh gig of the tour (1987-10-30 Milan); all later performances of the song during this tour more closely resemble the shorter single version of the track.

Many thanks to Falko for generously lending me another batch of low-generation tapes to transfer. 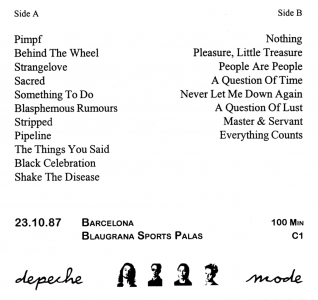