According to a 2008 tour list uploaded by PeterToo, this concert was initially planned to take place on 2009-08-04.

Song changes. As with any "second night" show, the boys changed it up a bit. During the first encore, Martin sang Shake The Disease (to deafening screams from the crowd), and then after Stripped, the band surprised the crowd with Behind The Wheel. Again, a great show, in a legendary venue.

Dave began to sing too early during Behind The Wheel.

Actress Olivia Wilde as well as Douglas McCarthy of Nitzer Ebb were in attendance. 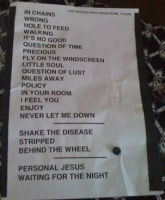