The only gig on this tour with But Not Tonight performed (as usual, acoustic version sung by Martin).

According to Billboard, the attendance of the four consecutive shows at this venue was 65,808 people and the gross sale was $7,446,382.

Depeche Mode played four shows at its Hollywood Bowl engagement for the Global Spirit Tour: Oct. 12, 14, 16 and 18. According to Andrew Hewitt & Bill Silva Presents, the shows' promoter, the four-night run is the most shows any act has played in a single engagement since the promoter began working with the Hollywood Bowl in 1991. 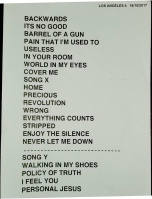