From DM Live - the Depeche Mode live encyclopedia for the masses
Revision as of 20:14, 13 May 2021 by DMLiveWiki (talk | contribs) (→‎Sea Of Sin)
(diff) ← Older revision | Latest revision (diff) | Newer revision → (diff)
Jump to navigationJump to search

This page lists lyrical differences between album, demo, and live versions. Some lyrical oddities on the remaster releases are also described.

Many lyrical errors / mistakes / transposition of verses, etc. during live concerts are represented in the "Something Went Wrong" compilation, and don't qualify for inclusion on this page.

Furthermore, in all live versions of the song currently available from 1980, 1981, and 1982, there is one additional difference compared to the album version: 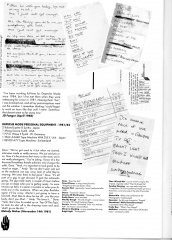 Thanks to an anonymous ex-label employee, several songs' lyrical changes found on the "Perversion" demo tape are now known. Differences to the album version are emphasized in bold.

World In My Eyes

Waiting For The Night