Dave Gahan tripped over a ledge on the middle of the stage during 'World In My Eyes', and as a result his microphone broke and he had to go to the side of the stage to get another one. Because of the delay in getting this new mic working. Martin carried the end of 'World In My Eyes' on his own. At the end of the song Dave went across the stage to Martin and they embraced. Then he jokingly said to the crowd, "Excuse me, I fell. Excuse me." When the song 'Home' had finished playing and the crowd continued to sing the melody of the song, Dave came back on stage and said "You guys are the best!" to the crowd. According to Billboard, the attendance was 65,191 people with $5,263,537 in sales. 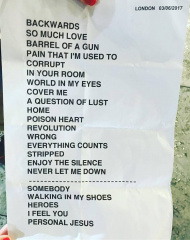