A second night in Hannover was announced on October 17, 2016. According to Billboard, the attendance of this concert and the previous Hannover concert was 73,050 people with a total of $6,216,182 in sales. As this was the first consecutive concert of this tour, there were some changes in the setlist for the first time this tour: 'Shake The Disease' was played instead of 'A Question Of Lust', and a rare acoustic rendition of 'Strangelove' was played instead of 'Somebody'. 'Heroes' was neither played nor listed on the final setlist sheet, and was not replaced by another song. After 'Personal Jesus', some fans shouted "Heroes!", the usual Global Spirit tour closer to Dave, but Dave Gahan looked at them and pointed at his throat, suggesting that he was unable to perform it that night. 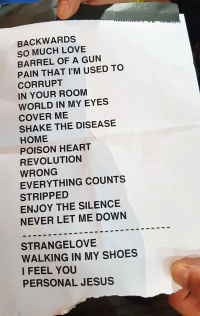 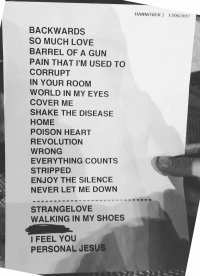