Difference between revisions of "Enjoy The Silence"

"Enjoy The Silence" is a song from the 1990 album Violator by Depeche Mode. It was released as a single on 5 February 1990.

Martin Gore: "It's just about a feeling of not wanting anything else, feeling totally satisfied, and even the words and everything seem an intrusion. You don't need anything else, you're totally happy. It's a nice song, it's nice, that's a way to put it, it's nice."

Dave Gahan: "And that's why, if you notice, in the video, you'll see that I only sing one line in the whole thing every now and then, repeatedly: "Words are very unnecessary". Because you got all these beautiful scenes, beautiful photography everywhere, and you look at this fantastic photography, so words [are unnecessary], and I'm a king, obviously, I'm supposed to have everything."

This was the only time ever in the studio when we thought we had a hit single. When I finished the demo of this song it was more of a ballad and sounded a bit like the harmonium version that came out on one of the formats. Alan had this idea to speed it up and make it a bit more disco which I was really averse to at first, because I thought ‘the song is called 'Enjoy The Silence' and it’s supposed to be about serenity, and serenity doesn’t go with the disco beat’. So I was sulking for about two days but after he sped it up, I got used to it and added the guitar part, which adds to the whole atmosphere. We could really hear that it had a crossover potential. I have to say that I was sulking for two days for no reason. 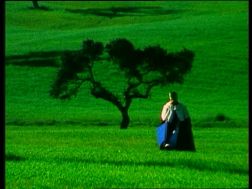 So, originally the demo for ['Enjoy The Silence'] was just me singing along to a basic pad. And it was really Alan [Wilder] and Flood who suggested that we speed it up and put a beat to it. And I was dead against it. I remember, because I thought it went completely against the aesthetic of the words and the meaning behind the song. So, I sulked off for a little bit [...] So, when I came back, yeah, it had a basic drum pattern and the baseline[sic] and that was all. And I still wasn’t convinced. But Flood said to me, ‘Could you just try playing some guitar along to it?’ So, I played along and then I came up with a guitar line for it. And then the kind of choir part. And then it kind of started making a bit more sense to me.

I’d like to take this moment to apologize to Alan and Flood.[2]

'Enjoy The Silence' was originally a slow track, a ballad almost, as a demo but I think Alan and Flood really believed that there was something else to get out of that track as an uptempo number. Martin was definitely against the idea because it was his song and that’s how he’d heard it, but he said, “Okay, you do it and we’ll see.” I remember coming to visit them in the studio and Fletch and Martin being very excited, saying, “Dan, we’ve got to play you this track!” We went to one of the little rooms to the side of the studio, they played me “Enjoy the Silence”, which was half-finished and I just went, “This is going to be huge.” It was just a perfect pop song, absolutely great. This was the version, by the way, that Martin had written and Alan and Flood had worked on to make it what it was.[3] — Daniel Miller - Electronic Beats, 2013

Q: When Martin gave you the 'Enjoy The Silence' demo, what made you figure it would be good if it was sped up? Did you slow or speed up any other songs?

A: Strangely, the thing that immediately came to mind was that I could hear Neil Tennant singing it in my head. Something about the line "All I ever wanted" sounded very hamster.....er.... Pet Shop to me. Most DM songs changed tempo to some degree from the original demo although none I can think of have been that extreme.

Martin's demos always had a complete set of lyrics but musically they varied from sometimes being quite detailed to sometimes very simplistic. I felt that to have taken the simple ballad approach for this song would have been to criminally pass on it's massive commercial potential. It was a great tune crying out for the kind of treatment it eventually got. Flood and I worked on the backing track before calling Martin in to play the guitar riff. As the track came together, I think it dawned on everyone (even Martin, who had been the most reluctant about taking the up-tempo route) that we had a hit on our hands.[4] — Alan Wilder - recoil.co.uk

I thought the very nature of the song was, you know, enjoy the silence, so it ought to have a very serene atmosphere. It took me a while to get used to the idea, but as we took it further that way with the guitar riff, it really pulled together.[5]

Dave Gahan: "I remember [Martin] sitting there and playing it, and he came up with this riff, and then I sang the song and everyone was surprised that I sang it so well - including myself." Andrew Fletcher: "It's the first time ever in our whole career that we've actually thought we've got a hit single. We just knew straight away."[6]

Q: F. Kevorkian mixed all the Violator album but for 'Enjoy The Silence' you preferred to release the Miller/ Flood and Miller / Legg mixes. What's the reason? Is it true that you don't like the sound of the guitar in the Kevorkian one?

A: Well, to be accurate, we mixed the LP together with Francois. Personally, I don't think there's much wrong with our mix of 'Enjoy The Silence'. The guitar sounds fine and the overall sound has a bit more sparkle. Daniel had a bee in his bonnet about the mix and felt very strongly that he could do better. We let him have a go and after 2 or 3 attempts (as you can see from the credits) decided that his mix was acceptable for the 7" version. Had he not pushed for it, I think we would have happily gone with the original mix. Funnily enough, our most successful single ever was one of the flattest, dullest sounding mixes with a snare drum that sounds like a sticky toffee pudding.[7]

The only thing about [François Kevorkian's mixing] was that, while the record was great, I wasn’t happy with 'Enjoy the Silence' as it was. I had real demo-itis about it. I’d heard this rough version which they’d done, and in my head, that’s how it had to sound. So I said, 'Look, I love the album, but I’m not feeling the way 'Enjoy the Silence' is at the moment. Can I go off and mix it with somebody else just to try it?' So, I went off with a guy called Phil Legg, who was an engineer I’d worked with, and did it the way I’d always heard it. I think they were so burned out by the end—it took a long time making that record—that they said, 'Okay, whatever you say,' and they used that version.[3]

Gahan recalled the group's excitement during the song's production:

I remember [Martin Gore] sitting there and playing it, and he came up with this riff, and then I sang the song and everyone was surprised that I sang it so well – including myself. And then we spent like a week trying to make it into something: 'Oh wow! I think this could be a single!' and 'What about if we do this and do that,' and 'Maybe we’ll have to redo the drum pattern,' and 'Mart, you could play the guitar a bit better.' And in the end, of course, we come right round, like full circle, and it’s just like, 'Well, it sounded really good the first day we recorded it.'[8]

As with prior singles, Daniel Miller mixed the 7" version, which went on to win the Brit Award for 'Single Of The Year' as voted for by Radio 1 listeners — a stark contrast with the group's normally lukewarm reception with audiences in their home country. To illustrate their reciprocally lukewarm enthusiasm for the music media, Depeche Mode collectively boycotted the award presentation. Alan Wilder recalls in a Violator editorial on Shunt, the official Recoil site: "We were all pretty like-minded about avoiding industry-based award ceremonies. Best left to Sting and Elton."

Into my little world

Pierce right through me

So does the pain

Directed by Anton Corbijn. The music video for 'Enjoy The Silence' features Dave Gahan dressed as a king carrying a folding deck chair. Through a series of landscape shots, Gahan is seen roaming solemnly through lush, remote vistas in humble search of a quiet place to sit, interspersed with quick cuts of black and white footage featuring the band and stylized photographs of the iconic Violator rose. The video uses an officially unreleased (in audio form, unreleased as of November 2019) edit of the album version of 'Enjoy The Silence', featuring an alternate introduction comprised of the outro choir melody, harpsichord-like stabs, bass stabs, the primary choir stabs, a hi-hat pattern, and snare.

There are two edits of the 'Enjoy The Silence' music video. One version begins with Fletcher looking to his right, with various shots of Gahan mouthing the lyrics directly to the camera intercut with long shots of him roaming the Scottish Highlands, Praia Da Prainha beach, and the Swiss Alps. The video concludes with a shot of Gahan dressed in costume singing the line "Enjoy the silence", before putting a finger to his lips.

The second version features Martin L. Gore looking to his right in the opening moments. In this version, the shots of Gahan singing to the viewer are cut, leaving only two scenes in which he sings the lines "Words are very unnecessary - They can only do harm." The video concludes with a shot of Gahan unfolding and sitting on his deck chair in the snow while the final line "Enjoy the silence" brings the song to a close. Some minor differences in the black and white group footage exist between the two versions of the video.

On 24 March 1990, Depeche Mode filmed a promotional video featuring the band members miming to the album version of 'Enjoy The Silence' on the rooftop observation deck of Two World Trade Center for French variety show Champs-Elysées.